In April this year, the World Health Organisation issued the first-ever guidelines for kids’ screen time. 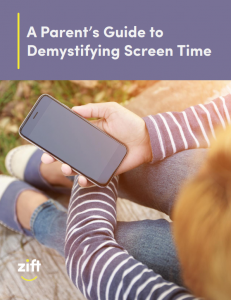 The reason behind this was because “Achieving health for all means doing what is best for health right from the beginning of people’s lives,” WHO Director-General Tedros Adhanom Ghebreyesus said in a statement. “Early childhood is a period of rapid development and a time when family lifestyle patterns can be adapted to boost health gains.”

The action comes amid growing research into the developmental effects of the widespread use of computers and mobile devices by children. One concern is that the mesmerising effects of videos keep young children from connecting with their parents and others, a key facet in building the sophisticated social skills that are central to human development.

The Australian Bureau of Statistics found earlier this year that 90.3 per cent of kids between five and 14 spent time on screen-based activities when not at school, and most of those – 56.8 per cent – were glued to screens for 10 or more hours each week.

The other factor is short-sightedness, the more children use devices the greater the chance of vision problems. As a result, in Australia, it is predicted that myopia (short-sightedness) will go from around four million to 22 million by 2050. This has long term effects as children grow older and is a potential looming health crisis. It is a progressive condition and the earlier it starts the greater a child’s chance of developing high myopia, which increases the risk of comorbidities such as cataracts, glaucoma, retinal detachment and myopic macular degeneration.

Luke Arundel, Optometry Australia’s Chief Clinical Officer, said: “The main cause is due to the increase lifestyle factors such as low levels of outdoor activity combined with low levels of light exposure and increased use of portable screens and devices”. “A lot of the research is suggesting that a couple of hours of sun safe time outside every day can be helpful in delaying the onset,”

At CCH we don’t believe in banning children from using devices completely, it is a matter of moderation. As part of our ongoing care for children, we have sourced “A Parent’s Guide to Demystifying Screen Time” guide. This document will give you some parameters to work with to ensure children don’t become “Tech Addicted”  – Click here to download ScreenTime Guide